0 shares
I shared the photo below on Instagram earlier last week and told everyone I would keep you updated on what the results said.  So here goes. 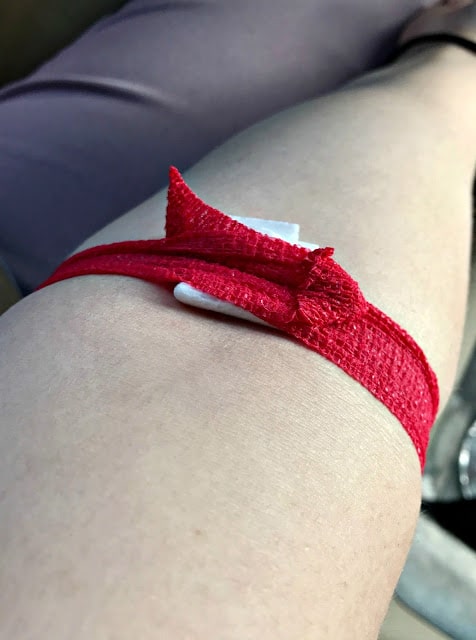 In July of 2009 I had gained 30 lbs.  I was at my heaviest of 182 lbs and we had struggled to get pregnant for a year.  2008-2009 was easily one of the toughest years of our lives between my husbands ladder accident, subsequent loss of job, student teaching, losing our first child, and my grandma and his mother’s passing.  Taking care of my own health was not exactly at the top of my list. We were in survival mode.  So when I finally decided to go to the doctor in July of 2009 to get on birth control, my doctor told me that she wanted to do some blood work.  A few days later I was diagnosed as a Type II diabetic.

What this means for me is that I have high levels of what is called a “C-peptide”, which is a protein that is made with insulin and then removed so that insulin can function.  Well apparently having a high level of that signifies that I have insulin resistance which is also known as Type II diabetes. This means that I make tons of insulin, but instead of my body using that to tell my cells to use the sugars that I do consume, my cells have stopped recognizing it and instead I store a lot of the food as fat instead of metabolizing it like a normal human.

For Type II diabetics we are supposed to go in quarterly to get our A1C draw done to check our progress levels over the last three months.  My results from last week are above.  I am essentially still in the “pre-diabetic” range with an A1C of 6.3 but I am only 0.2 points from being back in the Type II classification.  The worst part though…is that I am medicated, so going off the Metformin that I use to manage my levels would be detrimental.  I am angry at myself because this time last year I had really taken on the low carb high fat diet that is recommended for Type II diabetics and I had lost 20 lbs.  I was feeling great and then life happened and I just stopped taking care of myself.  The numbers above are EXACTLY the same as my numbers at my last A1C, which, embarrassingly was over a year and half ago when I was not taking care of myself at all.

Lets combine the fact that I have let my diet go and my weight has increased to the other fact that is greatly kicking my butt.  I am anemic.  Apparently, I have low iron and blood count levels and all of that is attributed to my extremely heavy and awful periods that last from 12-16 days.  Basically I lose nearly all my blood and my body is not handling it well.  I eat a ton of meat…believe me, this girl loves her iron rich meat.

Health-wise I am just not doing great.  I have no energy, I feel terrible constantly, I am always on my period it seems, I either have NO appetite and often skip many meals or I am ravenous and I eat everything in sight.  The depression is up and down and the mood swings are pretty freaking awful.

So I have some hopeful solutions.  First, I have an appointment with my OB to see about potentially getting a hysterectomy this summer.  This is something that I just at this point need.  I am tired of living like this and honestly the anemia is caused from this.  I know that I have the most energy and am motivated the couple days before my period returns and that is only because my blood volume and iron is higher.  This is the second time I have requested this and I am hoping that the doctor finally agrees to do it.  Last time they told me that I was too young, but that I also was not a candidate for an ablation and that even though my family starts menopause early, I could still have children.  Yeah…Right…NO.

Second, I start an iron supplement this week.  I am going to let that work some magic and hopefully get some energy back, and then I plan to start eating more restricted LCHF.  I do not eat terribly, but I also do not pass up a donut…ever.  That needs to change.  Finally, I am going to start yoga again at home.  I need to get moving and get into a better place both physically and mentally.

Lets just hope I can do all of this.  Send some good thoughts my way friends.