0 shares
Disclosure: We were hosted for this performance, however all content presented is my own.
A couple weekends ago, the tiny princess and I were honored to attend Colorado Ballet presents The Nutcracker.  We had went as a large family last year, but this year it was just the princess and I.  The day was hectic, but the performance was stunning. 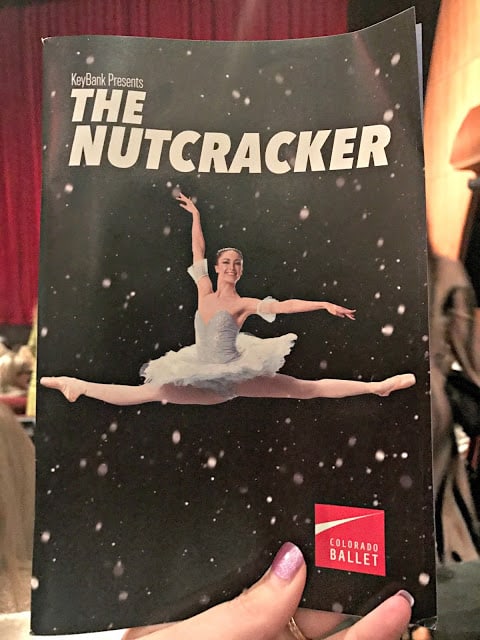 I had planned the day perfectly, I thought.  I would drop off my son at my moms about and hour and half before and then we would get downtown in time to grab our tickets from will call and have time for bathroom breaks and snacks.  That was not how that went down.  We did leave on time, but I did not anticipate the terrible traffic situation downtown.  We finally parked and ran to will call and into the show just as the curtain was literally coming up.

Thankfully our seats were on the end of the row, and we were able to sit quickly and not miss a moment of the show.  The orchestra started, the dancers began the performance and little princess and I were captivated.  She kept telling me that they were so pretty and asking how they stood on their toe and she REALLY wanted to open those presents. When the presents were finally opened and the Nutcracker was revealed, she laughed and loudly said “I have him”.

The first act ended with the magical snow and my little girl ready for a potty break and a snack.  I figured we were actually off to a pretty good start with her.  She had enjoyed the first act and wanted to go back to our seats after intermission.  We took a bathroom break, grabbed our snacks and headed back in. 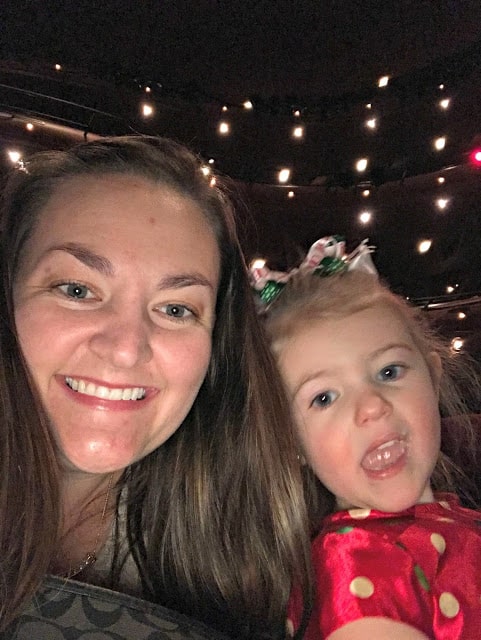 This was the point, that the threenager arrived. She started to eat her yogurt covered pretzels and popcorn and decided the only place she could sit was on my lap.  The second half of the ballet started and she was once again very into the music and dancing.  She laughed and smiled through all the dancers.  She loved the Arabian and Russian Dancers and told me that she wanted to do that.  Then Mother Ginger came on and she laughed hysterically.  Until her snacks ran out.

Once Mother Ginger was over, the snacks were gone, the threenager princess was done.  She started leaping off of my lap, into the aisle and trying to escape.  I had to quickly grab our coats and my purse and chase her out of the opera house.  I had hoped that giving her a couple minutes outside the performance to run off the sugar, would allow us to catch the end of the performance.  Nope, not even close.  She was a disaster as soon as we left the performance. 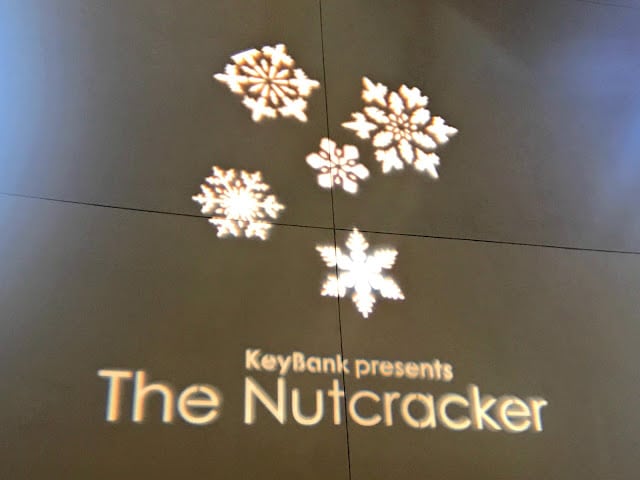 We ended up leaving with about 15 minutes left and I was totally bummed.  However, the portion of the show that we did see was spectacular and made me want to go back!  Even as we loaded up in our truck, the princess started crying because she didn’t want to leave.  We drove about 2 minutes and she was crashed out.  Turns out she needed a nap.  I already am ready for next season, a new year and a new tradition with my little girl.

The Nutcracker presented by KeyBank still has performances scheduled throughout the holiday season and is a can’t miss family tradition.  If you want to get tickets, you can click here and use the discount code “SNOW” for 15% off your tickets at checkout! If you would like to check out the Colorado Ballet please be sure to follow them on Facebook, Instagram, Twitter and their Website.