Disney On Ice Presents Frozen is coming to a city near you.  Check out our experience below.

Disclosure: We were provided tickets.  All opinions are my own.

Last night was a delightful and engaging night out, taking in Disney On Ice’s presentation of Frozen.  It has been 3 years since we first saw this awesome show and it was just as incredible and fun as I remembered.  Take a look at …. 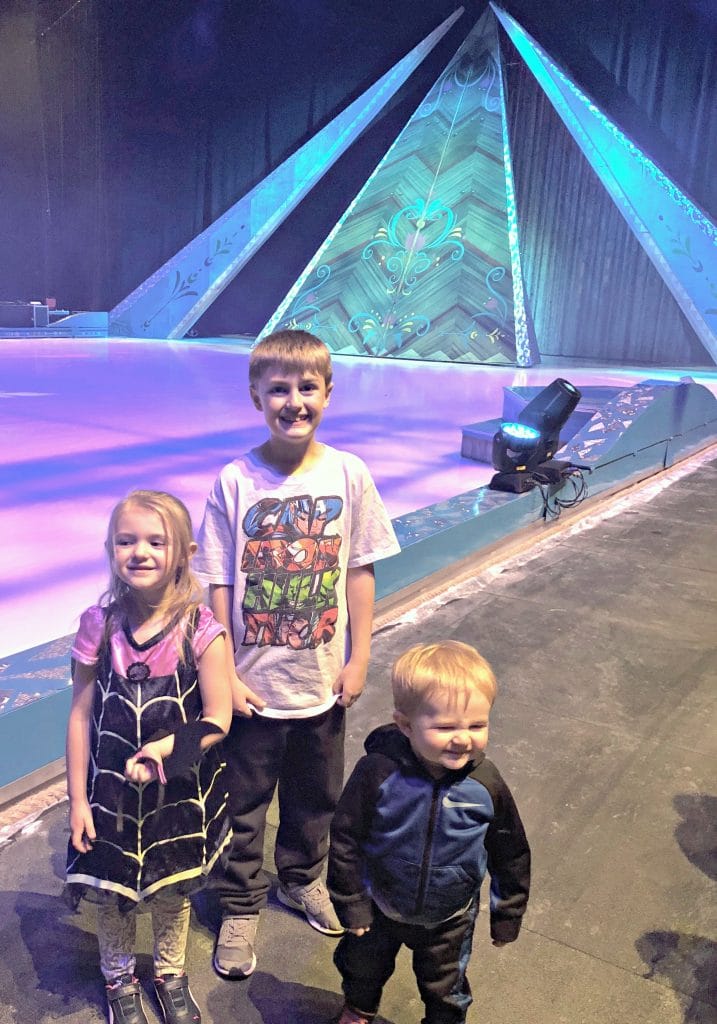 We arrived at the venue with amazing seats and 3 very excited little people.  The baby was most excited to see the mouse and that boy was just happy to be out of the house whereas the girl, decided to go a little less traditional and dress up as Vampirina to celebrate a fun evening.  That baby right there had surgery just 10 hours earlier and you seriously would not even know it with how amazing he was.  The doctor said he was fine to resume normal activity and boy was he right.  We took some pictures, took our seats and prepped for the show. 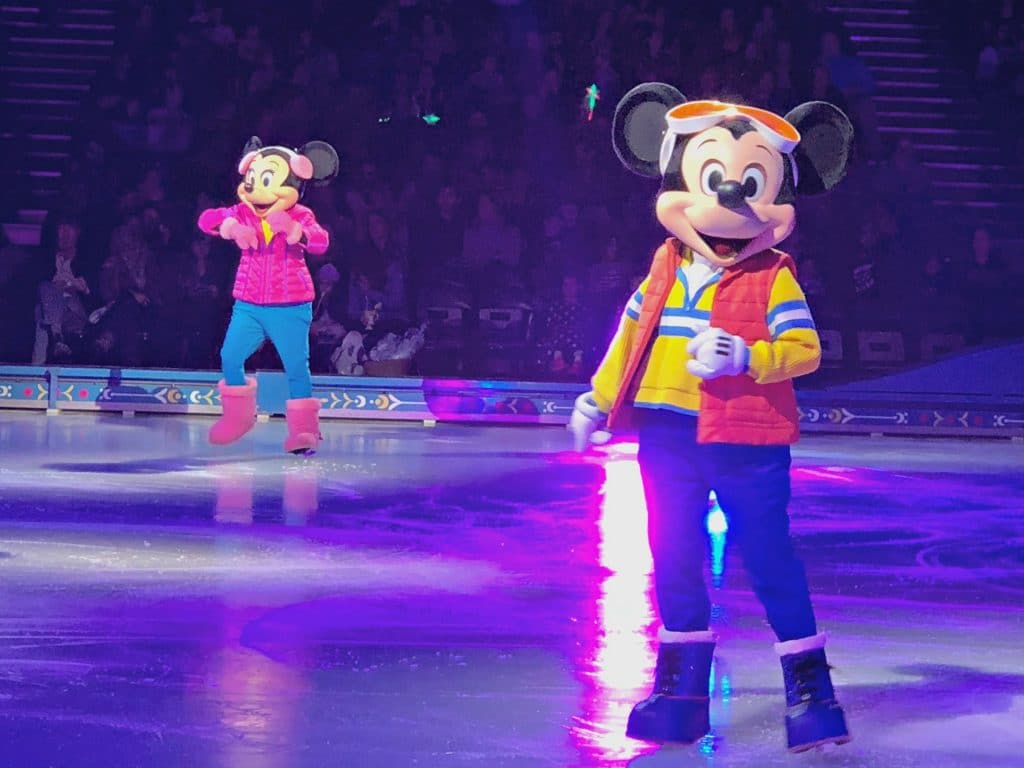 Disney On Ice always opens up with a welcome for the big guy himself and every kid in the crowd was cheering loudly!  This was followed with a parade of beloved characters from Disney history and then the start of the show.  The crowd was singing, dancing and just really in the spirit for a great show.  As Mickey wrapped up the intro, the lights faded and Frozen started! 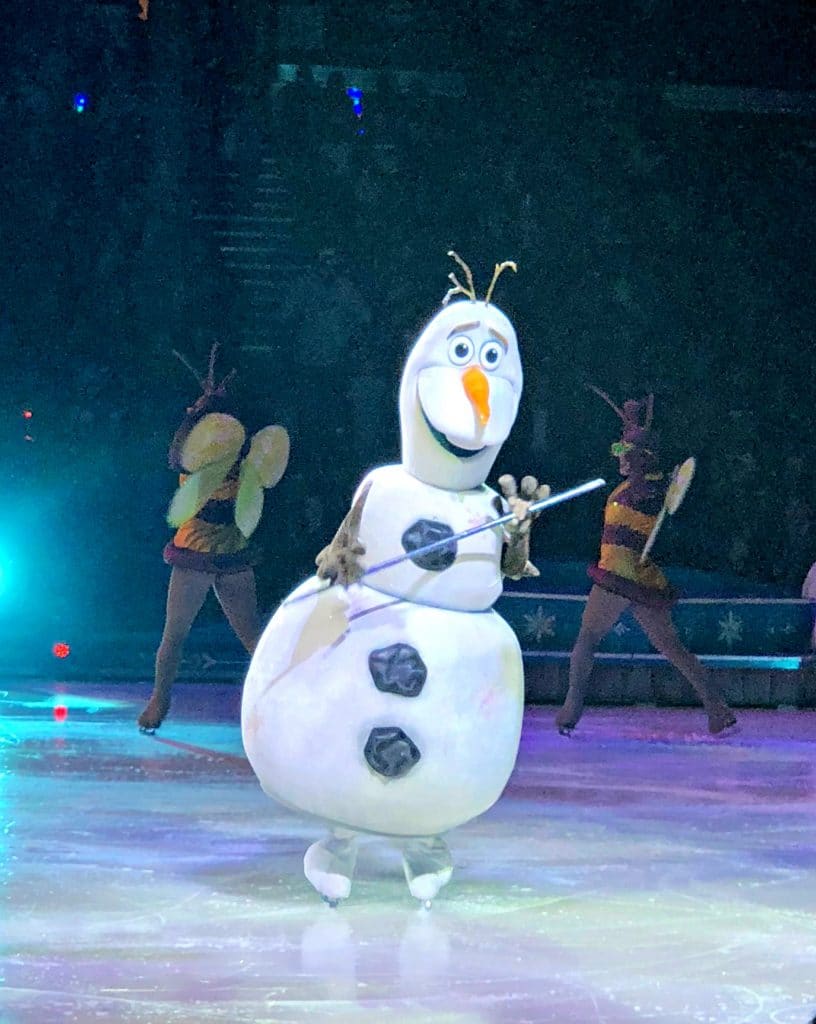 I took a ton of videos, but snapped some really good photos towards the middle and end.  Disney On Ice did a great job really pulling off some of the really vivid visuals that we are used to seeing in the movie.  There are a lot of pyrotechnics, moving pieces and parts but above all, great skating, fun tricks, lifts, jumps and as always fantastic music with awesome dance performances. 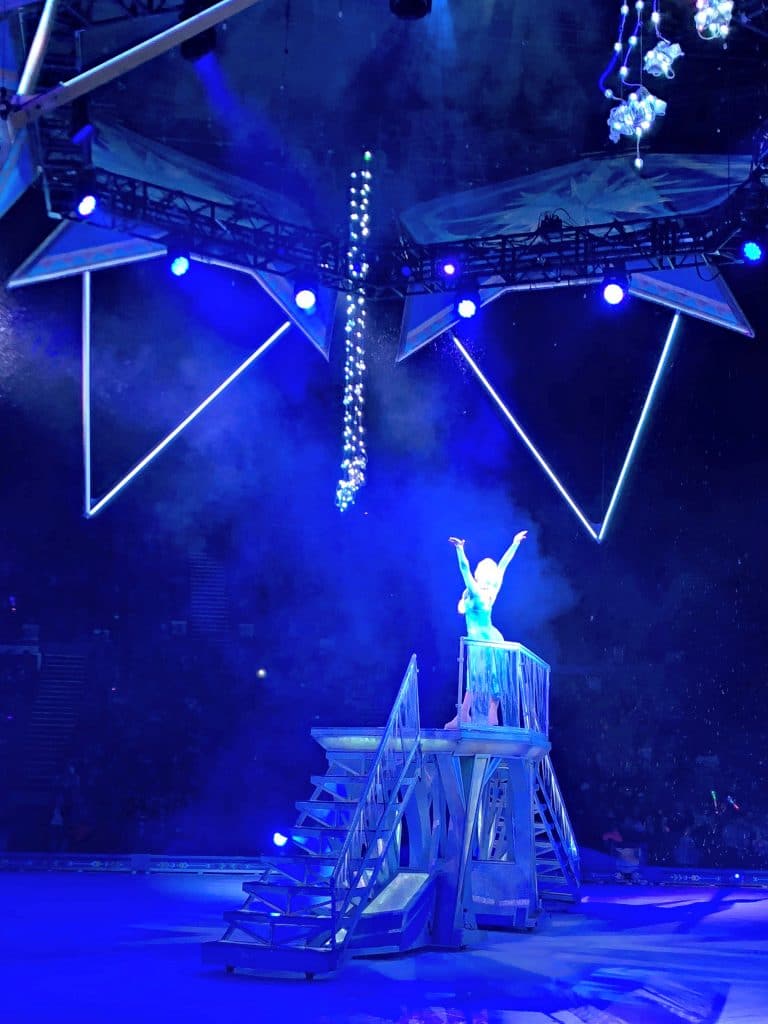 “Let It Go“, was the fan favorite of the night with every little girl in the audience singing along and watching in awe as they turned this stage into an ice castle fit for a queen.  I definitely sang along too and if you saw our Instagram story you got a glimpse of that hot mess.  It was super fun! 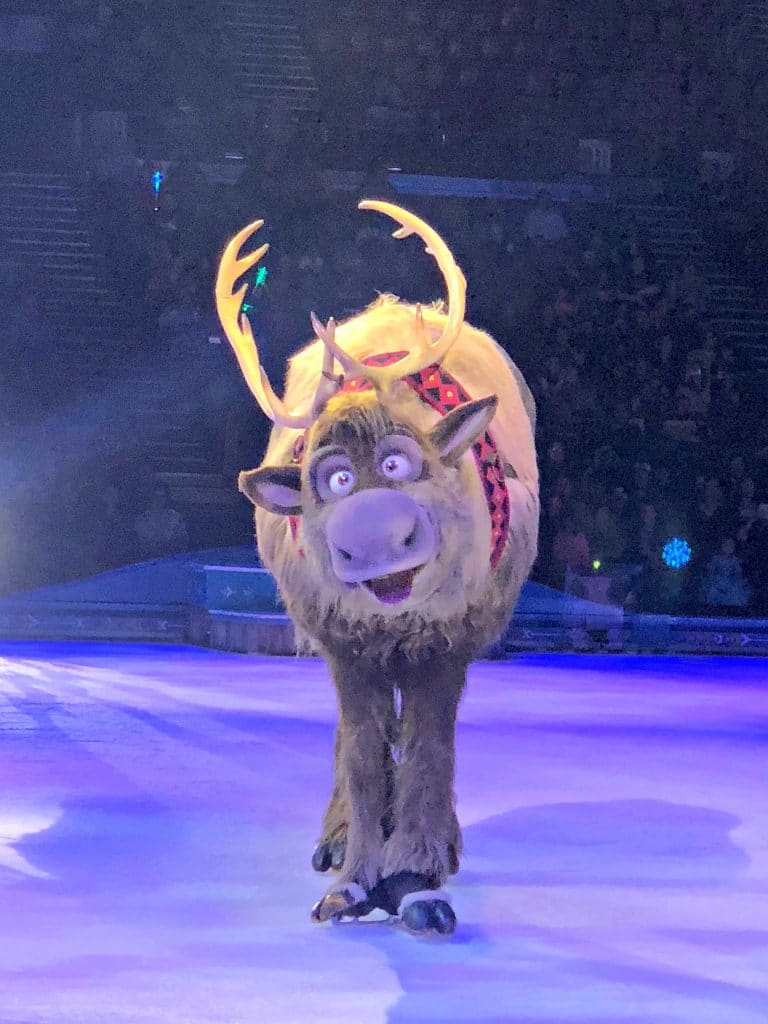 My favorite character is Sven and he was just as fun and interactive in the show as he is int he movie.  His interactions with Kristoff were awesome and we spent a lot of time laughing at him.  For a character that doesn’t say anything personally and who is controlled by 2 skaters, it was pretty impressive to see Sven standing out on the ice and bringing so much character to the performance. 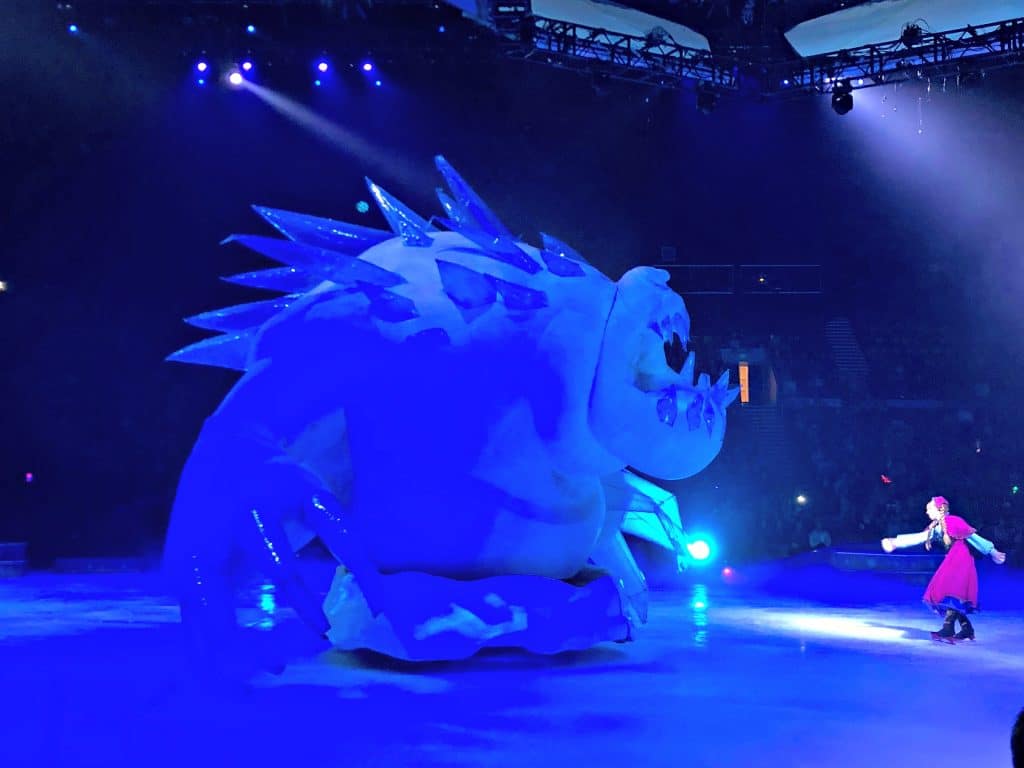 My son’s favorite part of the show was the ice monster.  I was the first time we saw the show too.  A huge blow up ice monster that Anna, Kristoff and Olaf take on and even get some audience members involved with. 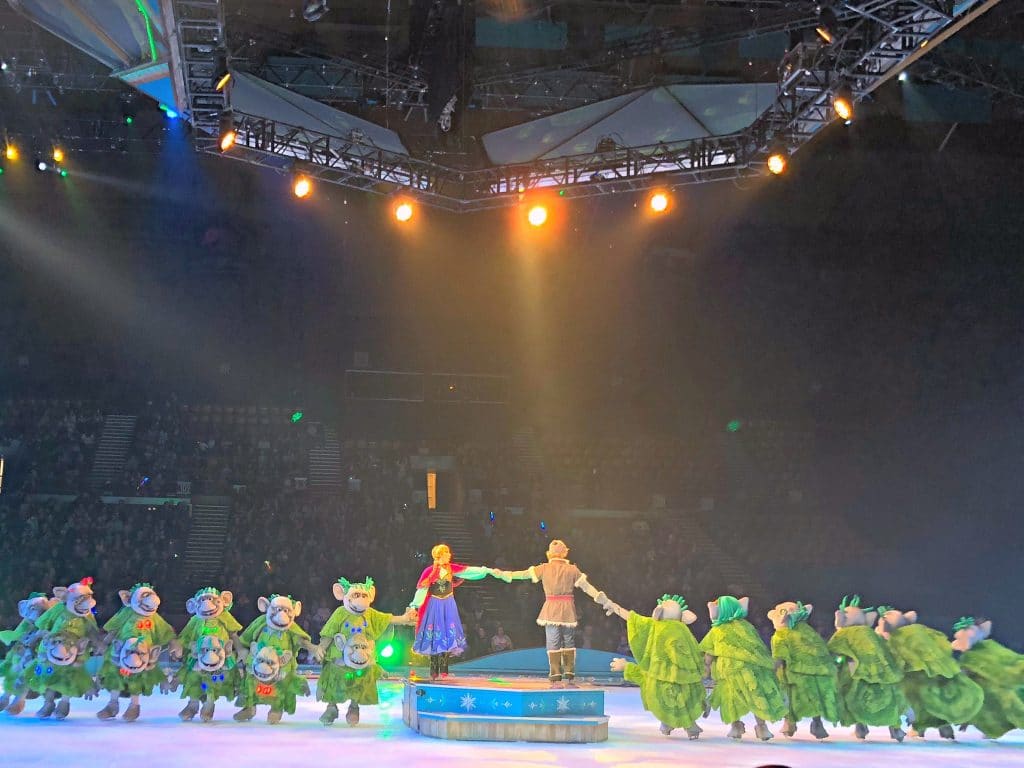 Choral lines might be my weakness. You can’t have a Disney On Ice performance without a choral line or kick line.  The cheerleader in me must just need these.  The troll part of Frozen is super fun and the trolls are super cute too!

I mean look at how focused this baby is.  This was near the end of the show and he was perfectly content watching everything.  For a baby that doesn’t stop this was fully engaging for him.  I will say there were a couple other tiny people around us around 1 and they all were entranced in the show.  So baby approved! 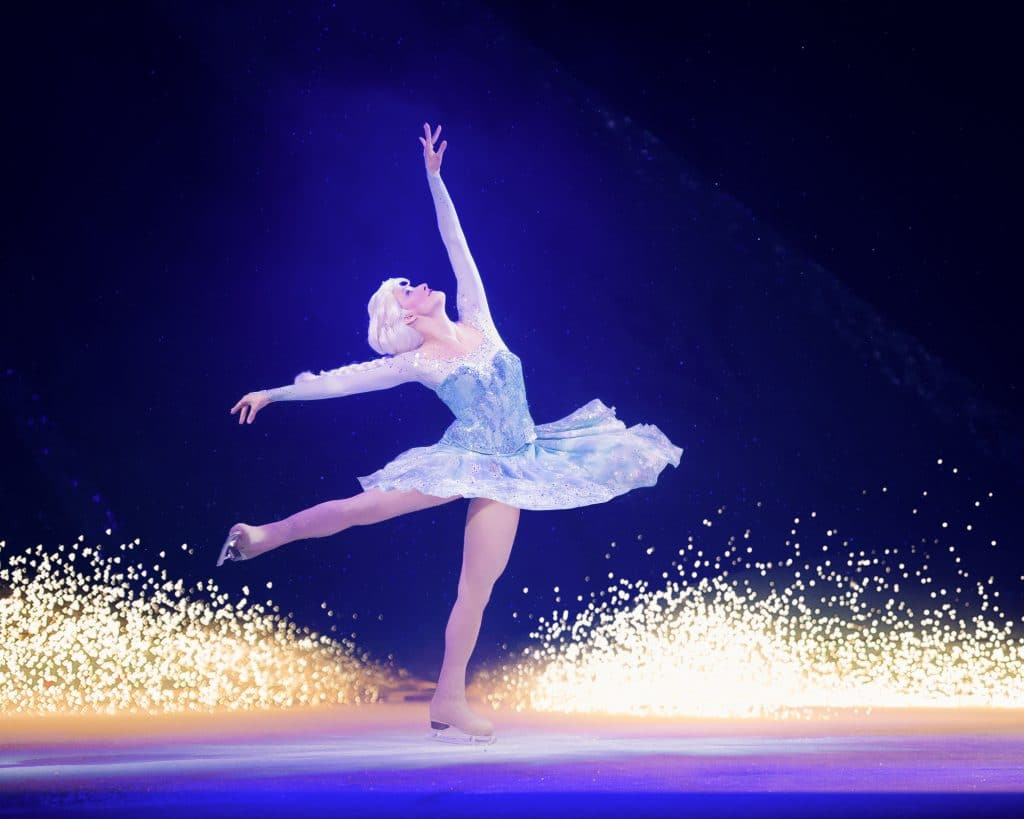 We just loved the show and are so honored and glad to carry on this tradition.  It has been nearly 25 years of Disney On Ice for our family and we love passing this onto our own kids.  It is so magical and such a wonderful experience to be able to bring Disney to your hometown.  At the end of the show, the kids in the lower seats started to line up around the ice and wave at the characters.  My nephew got to see Mickey so close and giggled incredibly loud while waving at him.  It was awesome.

Disney On Ice presents Frozen is in Denver through Sunday and you can still get tickets to the 7 shows that are left.  Grab tickets here and share in the magic!