As always, linking up with Melissa over at www.the-Mommyhood-chronicles.com for our top laughs of the week.

1.  Student: so red means wrong?  Me…hahahahahahahahahahahahahaha (to be fair, this is an extremely smart kid who missed 2 questions out of 26, guess he wasn’t used to seeing wrong answers).
2. My sister took Eyan to get his haircut yesterday.  He then said he was going to spend the night at her house with Zeusy (dog).  Then he said he was actually staying at grandmas but was sad he couldn’t sleep with Zeusy there. Then told his aunt to pick him up Tuesday (probably so he could sleep with Zeus).  When I asked when I get him he responded “I’m not a helicopter!”  So I’m not sure if he is moving back in or moving in with Zeus…either way he is not a helicopter.
3. After about 40ish weeks the tiny peanut has learned to self entertain and play with her toys longer then 30 seconds.  As of late she just sits there talking and staring at stacking cups.  Some serious conversations happening there.
4. Jason and I got hungry for some crab.  So on a whim we drove up the mountains to our local gambling town for the buffet.  We had Emberlynn but Eyan was with grandma.  As I was walking towards the buffet with Lynnie, this older lady stops me and says “she is so dainty.”  I thanked her all the while thinking oh if you only knew.  About five minutes later were back from the buffet, Emberlynn is face deep in a plethora of food and that same lady walks over to see her again and says “well dainty may not apply to meal time” then gives us a wink and walks away.  We both just laughed.
5. Wednesday we had the practice ACT going on.  One of my teacher friends was cleaning out her desk (after 5 years) and found some awesome foam 3D visors in the ocean theme (I got the shark) and an unopened bottle of Everclear (not for drinking, it’s used for DNA extraction).  So myself and a few other teachers threw on our ridiculous hats, walked down to our bosses office and pretended to be lit off the obviously unopened bottle of Everclear.  The office ladies bout died when they saw us.
6. Bonus: I took my AP kids out to the wetland and pond area behind our school to do some water testing.  Unfortunately the water was frozen super solid (like 7-10 inches…teacher fail).  I managed to find a hole in the ice by pulling out a 2L bottle someone had thrown in there.  The hole wasn’t quite big enough so I walked out about 5ft off shore (water at that point is only maybe 2.5ft deep) to grab a large landscaping brick to make the hole bigger, only that thing was frozen into the ice. So I walked back, as my students watched from the ice edge. All the sudden the district groundskeeper comes running towards us yelling at all my students to get off the ice…they were only on the edge not even 6 inches…they moved I come back in, he accuses us of polluting and then when I tell him I am the teacher and we are actually testing the water for pollution, the man says “sure you are.”  I guess the hot pink gloves and hat along with my jeans and tennis shoes probably made me look 16.  The groundskeeper then barged into our office 2 seperate times to tell on me. My boss just laughed.

The helicopter one is so adorable!!!!! Oh my g-d! I wonder what those office ladies were thinking!!! LOL #6! So cute! Always enjoy reading these!

In celebration of my big boys birthday this week, these laughs are dedicated to him!

1. Eyan tells me the other day he is moving in with grandma to Disneyland, “but don’t freak out mommy!”

2. Eyans new thing is after he has been to the bathroom to pee he then comes out sits down, contemplates whatever 3 yr olds contemplate and then announces he needs to poop! Makes me laugh so hard because its almost always when Jason has bathroom duty!

3. On Eyans birthday everyone was calling and singing the birthday song, and he just kept singing with everyone an wishing them a happy birthday. Adorable!

4. We have a calendar and stickers to countdown the days to Disney! Every morning Eyan tells me “we forgot something mommy!” Then runs to the fridge and tells me “we need a sticker on my calendar!” His excitement is awesome!

5. The other day Eyan was getting ready to go to my moms for the evening, so he grabbed his “pack back” and ran around stuffing toys in it. Then he asks me what he forgot and I said underwear, socks and clothes. He takes his pack back upstairs to his room puts 4 pair of underwear in it and comes back down to show me. He was so proud I couldn’t tell him that the undies might not cut it 😉 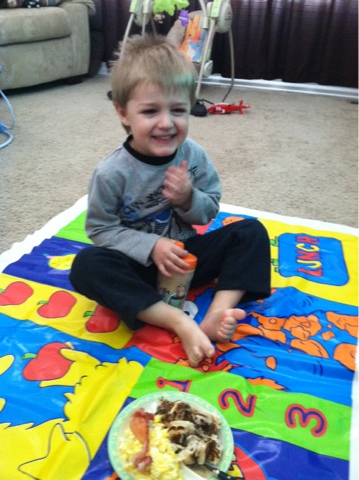 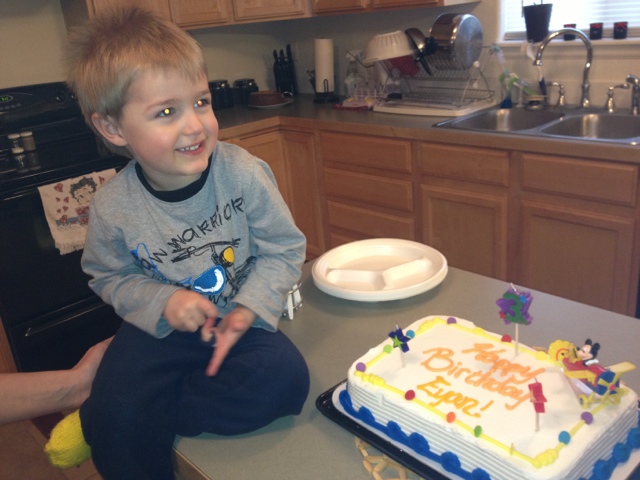 Haha that he thinks about something then needs to poop! Too funny

He totally got me with that yesterday!

I’m such a slacker! It’s been several weeks since I’ve posted my top 5 laughs…but I’m back!

1. Eyan has been sleeping in his toddler bed for about a month now. He as of late has been telling me that before bed there are turtles biting his toes. OMG! It’s too darn cute.

2. I am the worst gambler in the history of the world. So I make up for it by drinking and apparently pretending to win jackpots. Jason and his aunt were just laughing at me randomly yelling and pretending to play. Thank you amaretto sour for my awesome gambling skills.

3. Eyans new thing is that you have to put medicine on every owwie. So a few days ago Jason and Eyan were playing and he bumped his head pretty lightly. To him it was the end of the world and he needed medicine. So off we went to the cabinet and I pretended to put some medicine on it. Jason then tried to kiss it after the medicine was “on” and Eyan got upset at him and said “no take my medicine off”. We just laughed.

4. I thought I had enough room to roll over on the hotel bed. I. Was. Wrong! I fell outta that damn bed so hard and Jason just laughed his butt off at me.

5. The other night we were out to eat and Eyan needed to potty. So we went and he went and when we walked out he ran up to this little girl and yelled “I pottied!” So silly