I have been MIA on this hop because our Saturday’s have been so busy! But, I am back!!!

I am once again linking up with The Mommyhood Chronicles to share and read some silly laughs!

1.  While potty training, Eyan started to sing to his “parts”  I about lost my shit laughing at him trying to encourage himself to pee.

2.  My students were some wild monsters when we came back from spring break Monday.  Case in point…I gave new seating charts when they came in and made a huge mistake of sitting two boys close together.  These two boys like to randomly sing songs in class and high five very dramatically when they make a joke.  So just as I was going over some simple information about classification and taxonomy and I get to the animal kingdom, boy A sings to boy B “you and me baby ain’t nothing but mammals so lets do it like we do on the discovery channel.”  It took everything I had not to giggle and try to redirect them until boy B then said, “Mrs. Funk we were just classifying that we could do it because were mammals.”  Then I laughed. and said “how do either of you have girlfriends?”  Mrs. Funk 1-boys 0! 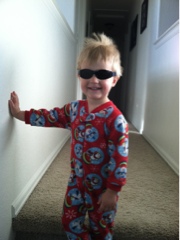 4.  The hubby and I were cooking last night.  I made patty melts and he was making french fries (all homemade!)  As he was cutting up the fries with the slicer machine he slipped and gave himself a small cut (like paper-cut size) on his knuckle!  I made the comment that he was fine, just don’t get blood in my food!  Fast forward to about an hour later.  I was up in the office where my scrapbooking supplies happen to be.  Eyan comes up and grabs some decorative crafting scissors and as I go to grab them out of my hand he cuts me with them between the thumb and pointer finger.  I tell Jason to come get Eyan and Jason comes up and looks at the blood coming out of my hand (he got me pretty good with those jagged scissors).  Then Jason says “your fine, “Eyan quickly repeats that and we all giggled.
5.  As of late Eyan is really getting into Mickey Mouse when he is watching TV.  It is to the point that he will yell at the TV.  He really gets excited when they use the fishing pole out of the mouse-k-tools.   Just now he said “GOOO ROCKET,” as we were watching the Goofy on Mars episode.  He is just so darn cute.

Haha- I love that he sings to his parts! E is just too cool- love the picture! Too funny that he repeated back to you fine- you must have been cracking up! He really is too darn cute- that is for sure!