In the last year, we have learned a lot about how important it is to advocate for your pet’s health care. I figured it would be a good time to update everyone and discuss our next steps with our sweet Mia girl and her cancer. 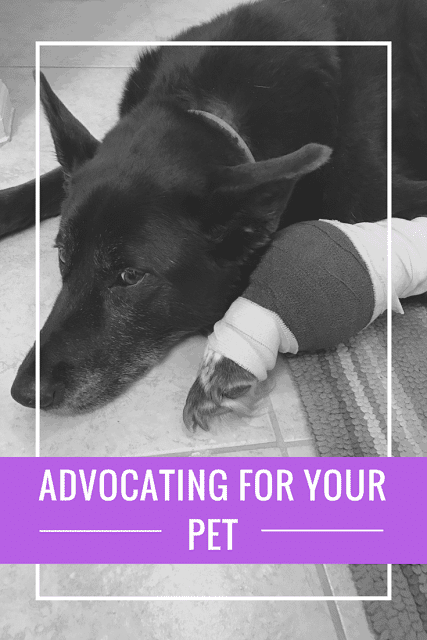 In April or May (I cannot remember) our Mia came running in from outside and slipped on our tile floor and took a bad fall.  She started limping about a week later but it appeared that her shoulder was just in pain.  We took her to the vet and they agreed. 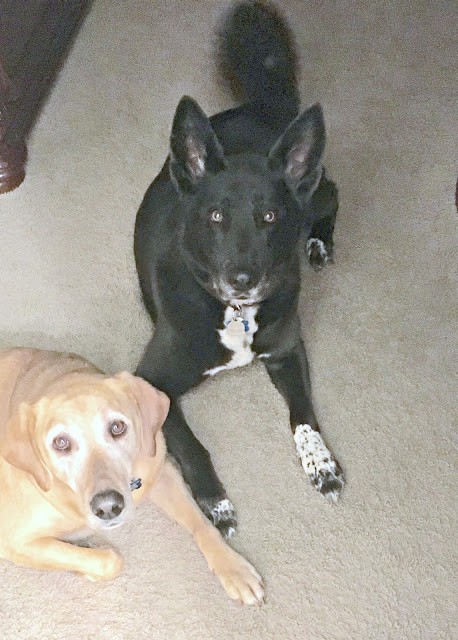 At this point there was no noticeable changes to her bone structure or her behavior.  The limp was consistent through the summer.  Some weeks she hardly limped and others she was limping around just a bit.  We kenneled her often and followed our vets orders to limit her activity while everything healed…but then the bump showed up in September. 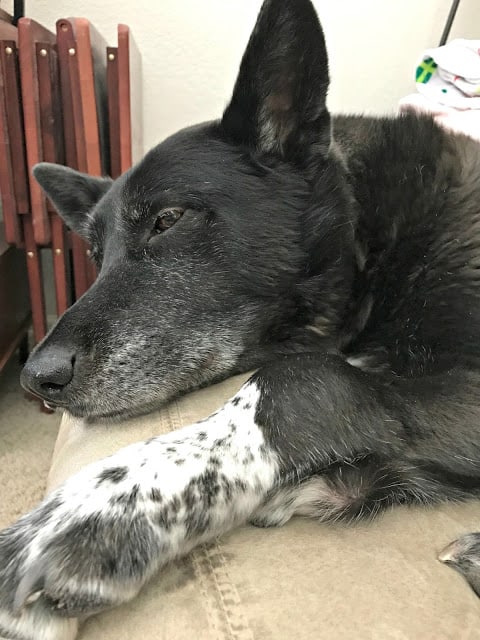 Initially, the bump was pretty small and the limp was there all the time.  The vet did an X-ray and told us that she had Osteosarcoma and it was an aggressive metastasizing cancer which gave her very little time to live.  We were sent home on doggy hospice and told to prepare for her journey over the rainbow bridge. 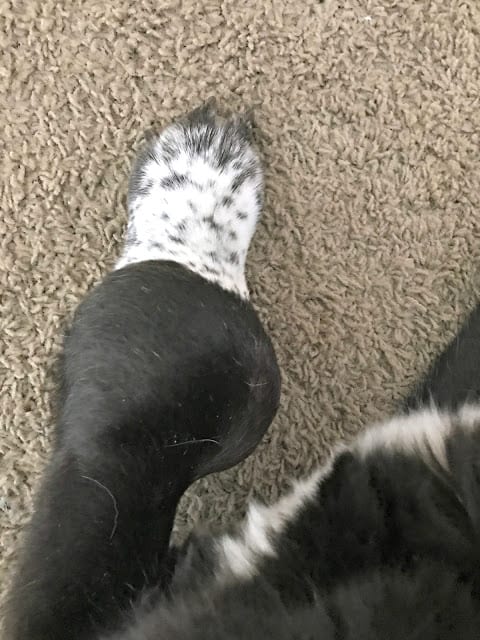 So we did.  We talked with our kids, we spent hours coddling and loving on our girl as we watched her cancer growing and growing.  We were waiting for her health to decline to take her in and allow her a little control over when it was her time.  However, our sweet girl, continued to live a pretty normal and active life for the most part.  She still goes up and down the stairs, jumps on and off our tall bed, spends time with her family, fence fights with the neighbor dog and eats, drinks and potty’s as usual.
Warning: The Photo below is semi-graphic, and contains an open wound about the size of a dime. View at your discretion.

For four months we continued to care for our girl, to make sure she was happy and comfortable and to wait for that time when it was time.  This week, I took her into the vet after her tumor that had just been leaking lymphatic fluid with a bit of blood in it, opened up with a sore and was bleeding a lot.  Tumors are vascular in nature which means that they have a lot of blood vessels going to them and so this was to be expected.  What we gained from this vet visit was hope. 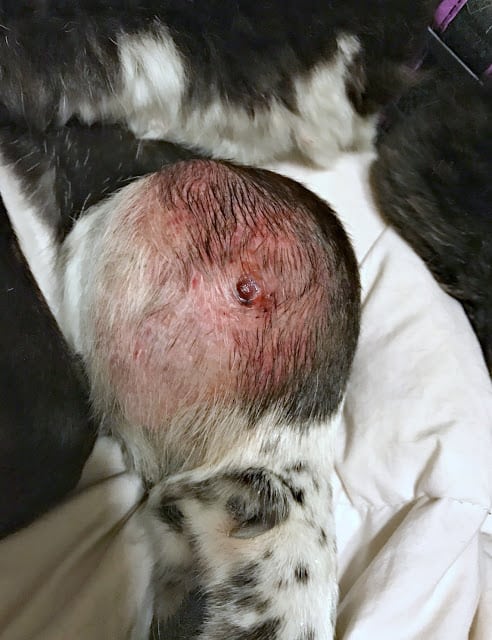 Walking into the vet, they were surprised to see our girl actually walking.  Her weight was still normal, her physical checked out well and her vitals were great.  We were just getting a nice bandage until it was time.  We were trying to push it another week into February because we just wanted to let her choose her time but knew that we could not fight an open wound that was prone to infection much longer.  The vet made mention that he did not expect her to be doing so well and that the cancer may not have metastasized as was expected.  He asked if we wanted to do a chest x-ray to see and so we elected for that and surprisingly our girls x-ray came out clean.  No cancer that they could see anywhere.  Hope was gained and a new plan was made.  We were now discussing amputation and a longer life with her.  Her diagnosis was now Chondrosarcoma which is slower growing and has a better survival rate. 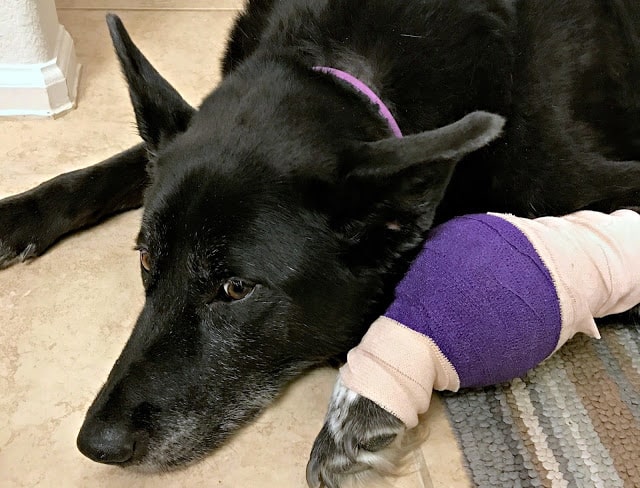 At this moment, was when I realized that we should have advocated for our pet’s health much earlier on.  We should have got a second opinion and ran a few more tests.  What if we would have decided to put our girl down in September and end her life before it was actually time.  Ugh, I could just kick myself for this.  I have a few pointers for people going through this.
1. If you notice a limp, take your dog in immediately and have them do an X-Ray.  Had we known in May that this was cancer, the tumor would never have gotten this big and would not have opened.
2. If you feel that something is off with the pet’s diagnosis, demand more tests.  Our vet is good, but also budget friendly.  He told us that the chances of the cancer already being in her chest were 95% and that it would be a waste of $300 to do the X-ray on her chest since the paw X-rays confirmed the cancer.  We did get a second opinion and that vet said the same thing.
3. Research!  I thought osteosarcoma was the only bone cancer in dogs…when chondrosarcoma was brought up, I was so mad that I did not have a clue what this was.  Our girl has every sign and symptom for this type of cancer and now it is clear as day that we were wrong and we have prolonged her pain for far too long.
4. Pay attention to your pet.  I have been around pet’s who are dying and when it is time, they have a way of just telling you.  Our girl has not done this.  She is still adamantly doing everything that she possibly can and that to me should have been a HUGE flag that the diagnosis was wrong.
5. Ask Questions…even the hard ones. We have decided on amputation for her.  We had several questions, with the big one being “how much time will she have after this?”  We realize that the cancer may have spread microscopically and that the X-Ray cannot see that.  We know the risks and we are constantly discussing as many questions as we can come up with.  Our vet is open and honest and does a great job explaining.  We realize that our girl is middle aged and that we are not buying her a decade of time, but we also know that by removing this cancer she will be much more comfortable, even if the cancer has microscopically infiltrated other systems.
We have a tentative surgery date scheduled for her and are eager for this.  We know that she will do just fine on 3 legs as she has pretty much been using just 3 legs for the last 4 months.  Her open wound has grown to the size of a 1/2 dollar and is pretty gross looking, but we are managing.  Our vet has been great and we will keep everyone updated on how she comes through.
Thank you for your support, prayers and love.  We sure do appreciate it!

I know this post was written in 2017 but what was the outcome? Going through a very similar experience with my greyhound :(

I am so sorry to hear that you are going through a similar experience. We amputated Mia's leg at the end of January. She did AMAZING but the pathology did come back as an osteosarcoma as originally diagnosed. We were still told that she had likely another 6-9 months ahead of her. Unfortunately she ended up going down the stairs wrong and something happened in her back which completely immobilized her and by mid-April, we had to make the hardest decision of our lives. I did have a coworker have their lab get the same diagnosis within just a few weeks of our girls and they amputated a back leg and got nearly 14 months longer with their tripod. I would NOT change a thing. She was so active, happy and healthy those last few months and it was worth every penny and emotion we had. Not sure how much that helps, but please let me know if you have any more questions.