0shares
Easter is one of those holidays that has always been special for me.  Not because of some dumb bunny or the candy, but because of family.
Growing up we would do our hair fancy and go to my Great-Grandparents house for church. My Great-Grandma would always make my sister and I matching dresses and then we would go to church, sing hymns and listen to the story of the resurrection.  After the service there would be a modest egg hunt at the church with little candies and then we would head back to Great-Grandma and Grandpa’s for a delicious supper and another little egg hunt…with money!  Great-Grandpa would hide eggs with coins in them!  At home we had baskets with only some candy in them and that was it.  It continues to be one of my favorite days to spend with family because of these modest beginnings.
Over time Easter morning has changed and so has our family.  Great-Grandpa passed away and we spent more time with Great-Grandma in a nursing home, still driving her the hour to her old church.  Eventually that drive was too difficult and we would gather the entire family at one of our skating rinks and do HUGE egg hunts and potluck lunches with everyone present.  Eventually Great-Grandma also passed however, we still continue to celebrate Easter together. 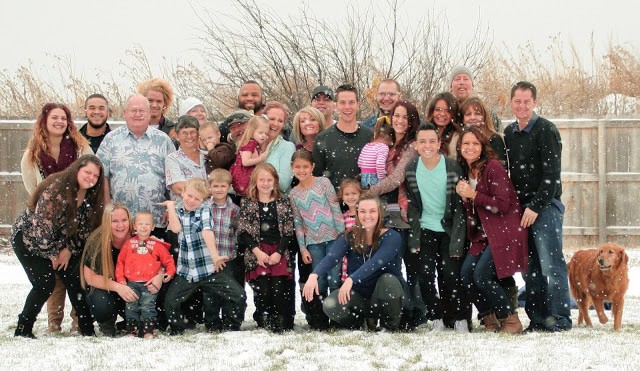 It has always been a family day, always a day of Jesus and always relatively modest.  Even as a parent, I tried to keep it to dollar store items and candy, with a small egg hunt (were talking 10 eggs each with jelly beans in them).  I can sew but do not have the time to make the outfits for my kids but I always ensure that they look nice.  We do not attend church services anymore, for various reasons, but still remain strong in our faith.  Normally their baskets, have bubbles, and sidewalk chalk, candy and maybe a little dollar item or two here and there.  Modest, because the reason for this holiday is bigger than a dumb bunny and candy right. 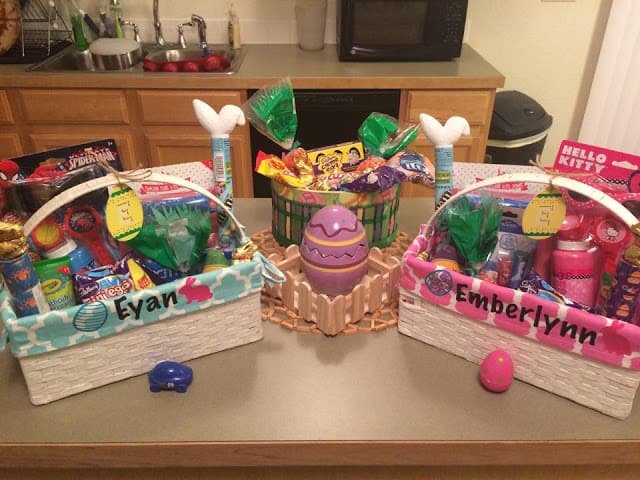 Except that this year I got caught up in the dumb bunny and some candy.  Really freaking caught up and I have been building this up for a year now.  I have taken the holidays to the next level and created entitled, spoiled and rude children who have limited listening skills and did not even think about the repercussions until this morning hit. 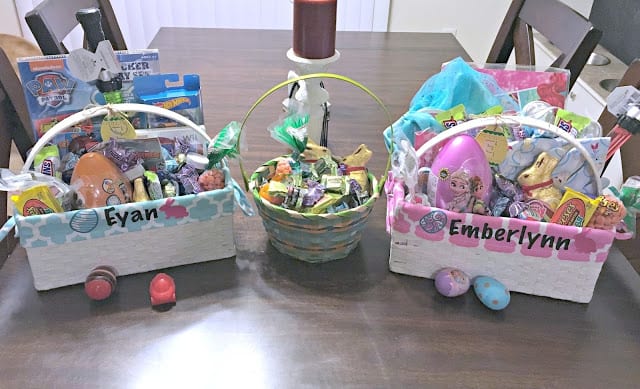 This is what my kids woke up to and my expectations of a perfect Easter went with these dumb baskets and that bunny.  I had told our oldest NOT to go downstairs until everyone was awake.  I told him that if he did and he got into the baskets he would not get an Easter basket.  This Easter was a bit more special because the husband was home for the first time in 5 years.  He would get to see their faces light up with a little basket of goodness.  I was so excited and I made sure to go over the top with basket gifts.
However, last night, the littlest peanut had nightmares for 2 hours and no one slept…except our oldest son.  He slept and like normal he was up before the sun and ready to start the day.  He came to wake us up after only sleeping about 3 hours and I promptly told him to play in his room until his sister wakes up and then we will all go downstairs together.  He said ok and went back to his room…I drifted back to sleep.  30 minutes later I heard a little patter of feet on the main floor and jumped out of bed to find my little boy so happy with joy that the bunny had brought him all this amazing stuff and the coveted Wii game that he had been desperately wanting.
I asked him why he came downstairs and didn’t listen?  He sort of ignored me and played with the giant orange egg from his basket and showed me the game that he got and had already put away.  I tried telling him that it wasn’t ok and made mommy and daddy sad that he got into the basket without waiting for anyone and then he proudly told me that he found ALL the eggs too.  Heart Broken.
I raised this kid, I taught him nothing about listening, nothing about respect, nothing but entitlement and made it worse this year by putting items into an Easter basket that had no place there.  I took everything away from both kids and declared Easter as cancelled.  My kid ruined it…but really I RUINED IT.  I made it a bigger commercial holiday than I should have.  I bought into the dumb bunny and I forgot that the real reason that I love this holiday is family.
So cancelled Easter has been going well.  The kids are not playing with all the crap in those baskets, instead they are playing with old toys.  They are not on a sugar high from that chocolate, instead they ate some cereal and played quietly.  We are still going to be with our family and although there will be an egg hunt, my son is NOT participating.  I believe he does need to learn from this, however, cancelling the family time that we all enjoy is not the way to go.
Easter sucks a bit this year, but only because I made the choice to build it up into something that it NEVER was meant to be.  Next year, I know we are returning to our roots and modesty…maybe even forgo the baskets all together.

Previous Post: « Enjoying Family Time with #GrouponCoupons
Next Post: Princess Ever After was a Dream Come True »